Iceland is renowned for its majestic scenery, relaxing natural hot springs, and incredible wildlife-spotting opportunities. In fact, the country is one of the best places in the world for whale watching.

Whales are common just off the coast of Iceland, providing a great opportunity for you to get up close and personal to some of nature’s greatest mammals in their natural habitat. 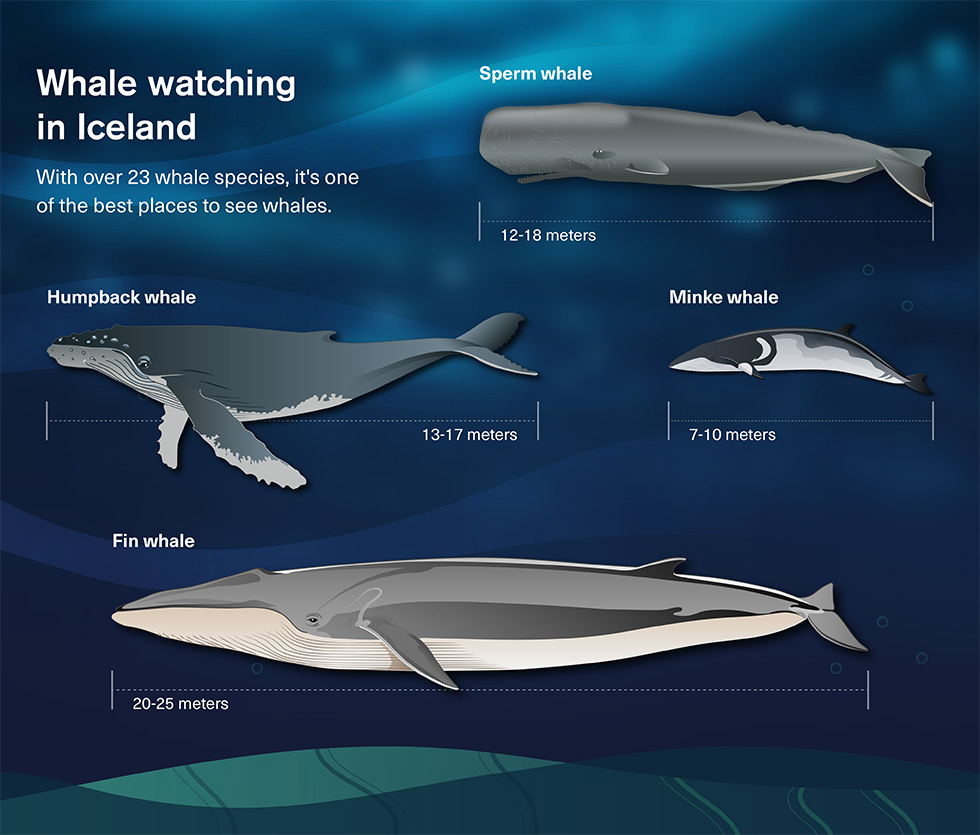 There are around 23 species of whales found in Iceland's waters. Some species reside here all year long, while others just pass through for the spring/summer feeding season.

A guided tour, typically between late spring (April) and early August, is often the best way to see these whales in Iceland. At Icelandair, we offer a variety of whale-watching tours in Iceland – from 3-hour cruises around Reykjavík, to our Whales of Iceland Experience package, which combines a Reykjavík whale-watching experience with a visit to the spectacular Whales of Iceland exhibition.

Like all of our tours, you’ll not only discover a multitude of little-known facts about whales from knowledgeable guides, you’ll also get to experience the best viewing spots and learn helpful tips to help you spot them. 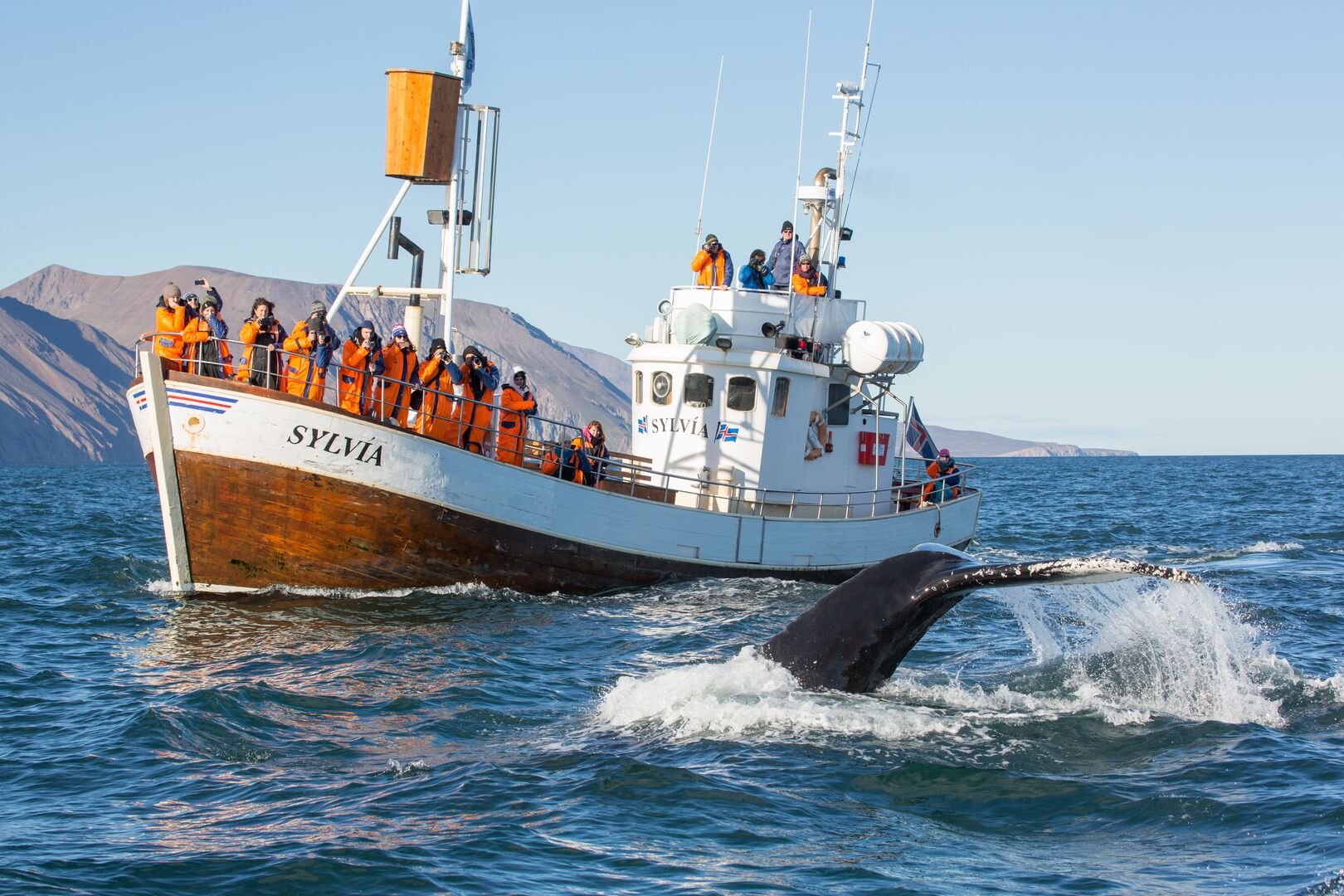 Whales are warm-blooded animals, and like other mammals they give birth to live young and nurse them throughout their infancy. They also breathe through their lungs, meaning they must come to the sea's surface every now and again to breathe, since they cannot breathe underwater.

Whales are efficiently streamlined to aid their swimming in the water, which gives them speed and agility to move quickly in search of food. Their flukes (the two lobes of their tail) propel them forward, and their pectoral fins (small fins under the body) help them steer in the direction they need to go.

As such large mammals, it’s no surprise that their lungs are also incredibly big. Their lung capacity allows them to swim underwater for long periods without having to come up for air. The amount of oxygen whales can absorb from one breath is four times more than humans!

Let’s take a look at some more fun facts about the whales of Iceland: 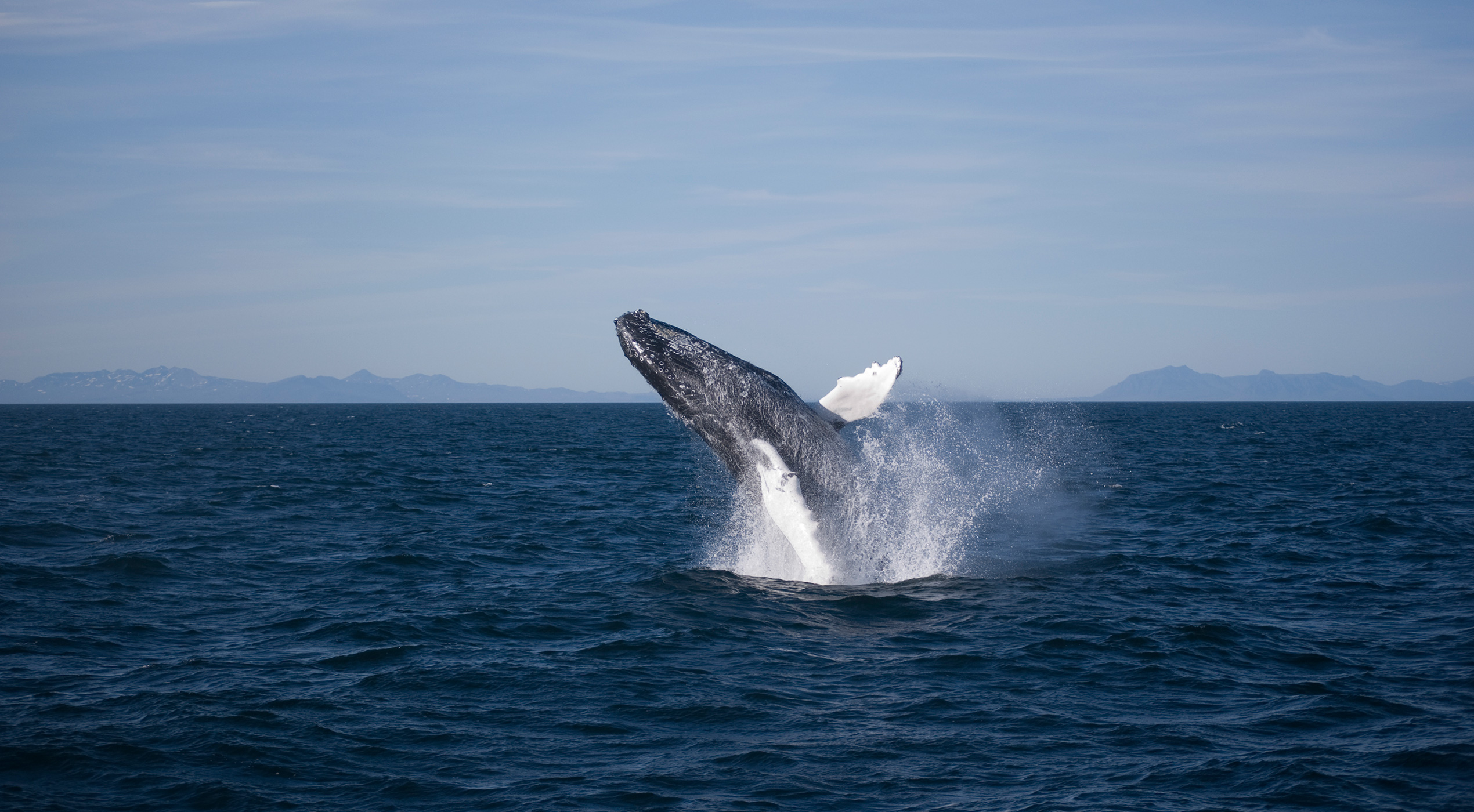 What types of whales can be found in Iceland?

There are around 23 species of whales that can be found in Icelandic waters, each one unique in their characteristics. Read on to discover more about some of the most commonly spotted whales in Iceland. 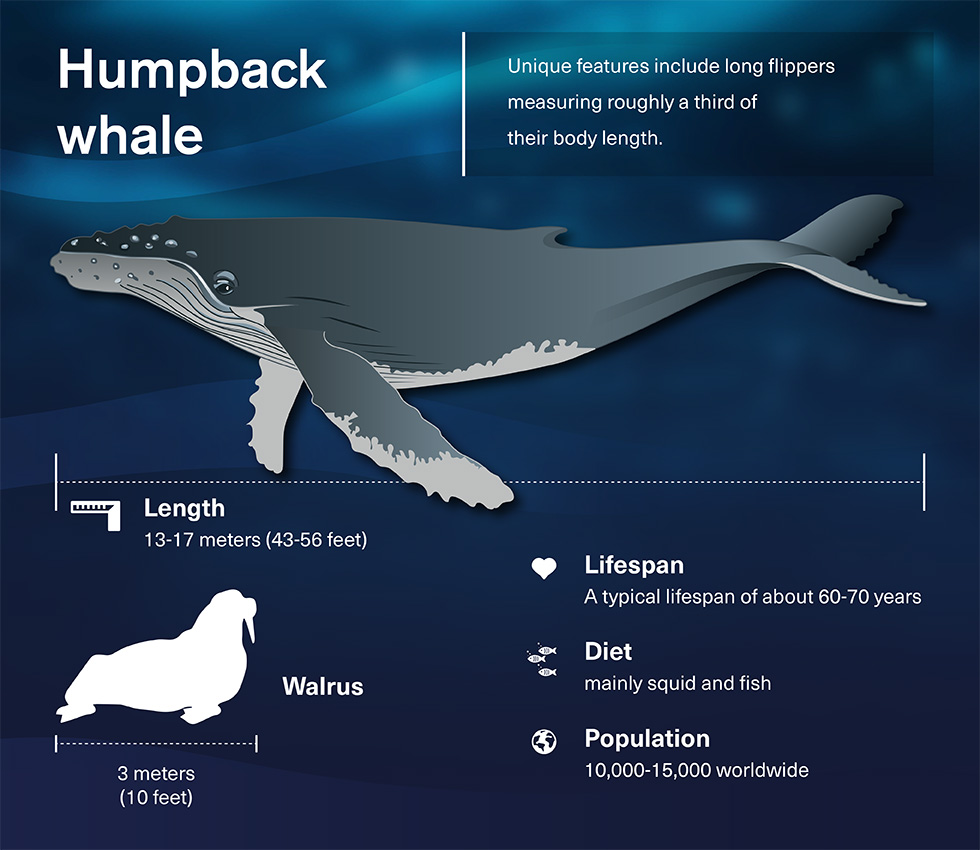 Humpback whales typically come to Iceland during the warmer summer months, and can be best seen in North Iceland. Here are some other facts about humpback whales: 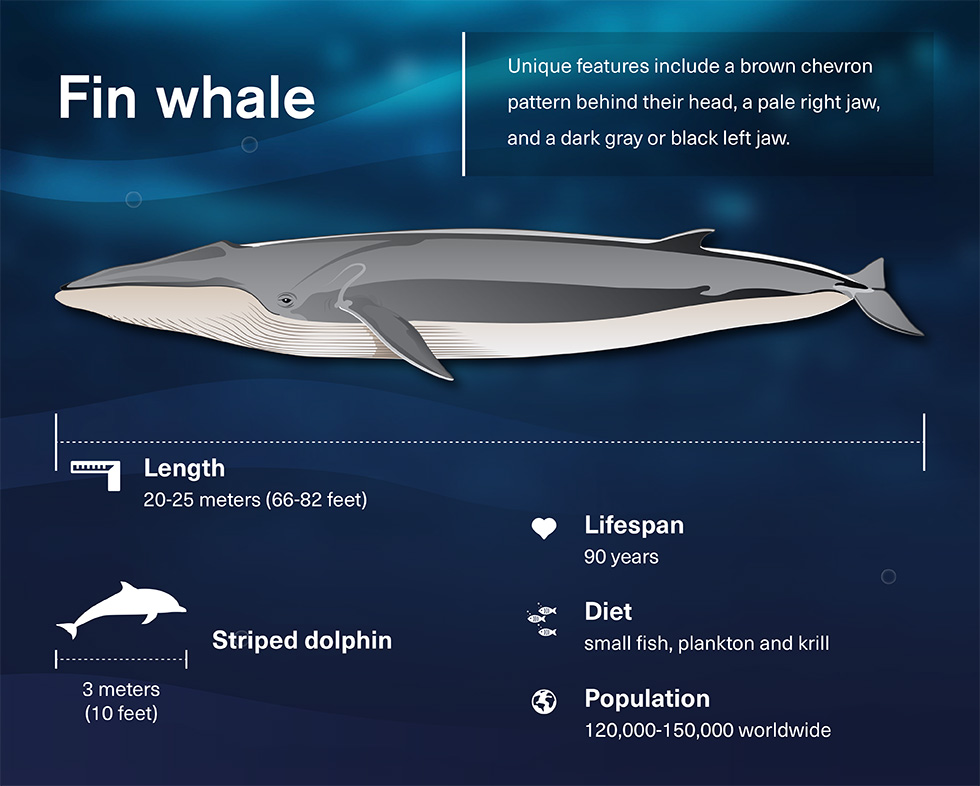 Fun fact! The fin whale is the second-largest animal in the world, and with a long, sleek body, one of the fastest swimmers – with the ability to swim at up to 72km/h (45mph). Fin whales are most likely to be seen during the summer months, although less frequently than minke whales and sperm whales. Here are some more facts about fin whales: 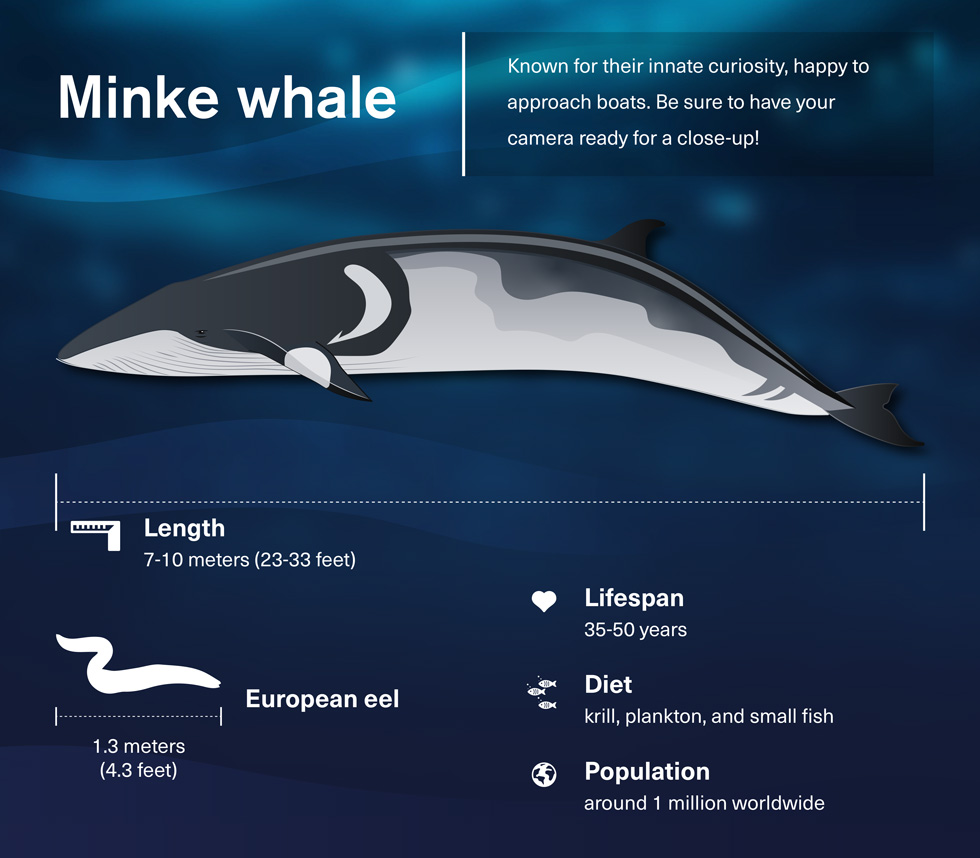 Minke whales are some of the most common whale types in Iceland, with the population size having increased over the years despite commercial whaling. Minke whales tend to have a small, sleek body that is dark gray on top and whitish underneath. Other facts about minke whales: 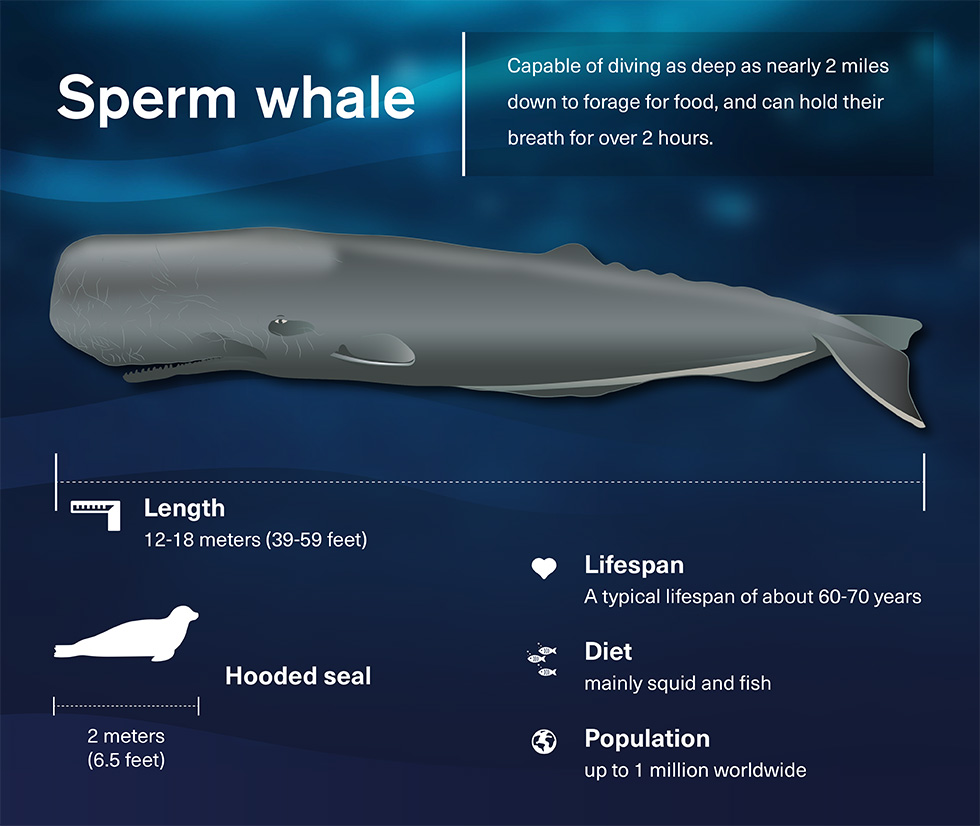 The sperm whale is the largest of the toothed whales, with its head alone measuring nearly a third of its body length. Author Herman Melville’s famous Moby Dick was in fact a sperm whale, although the real thing is much more placid. Further facts about the sperm whale:

When is the best time to see whales in Iceland? 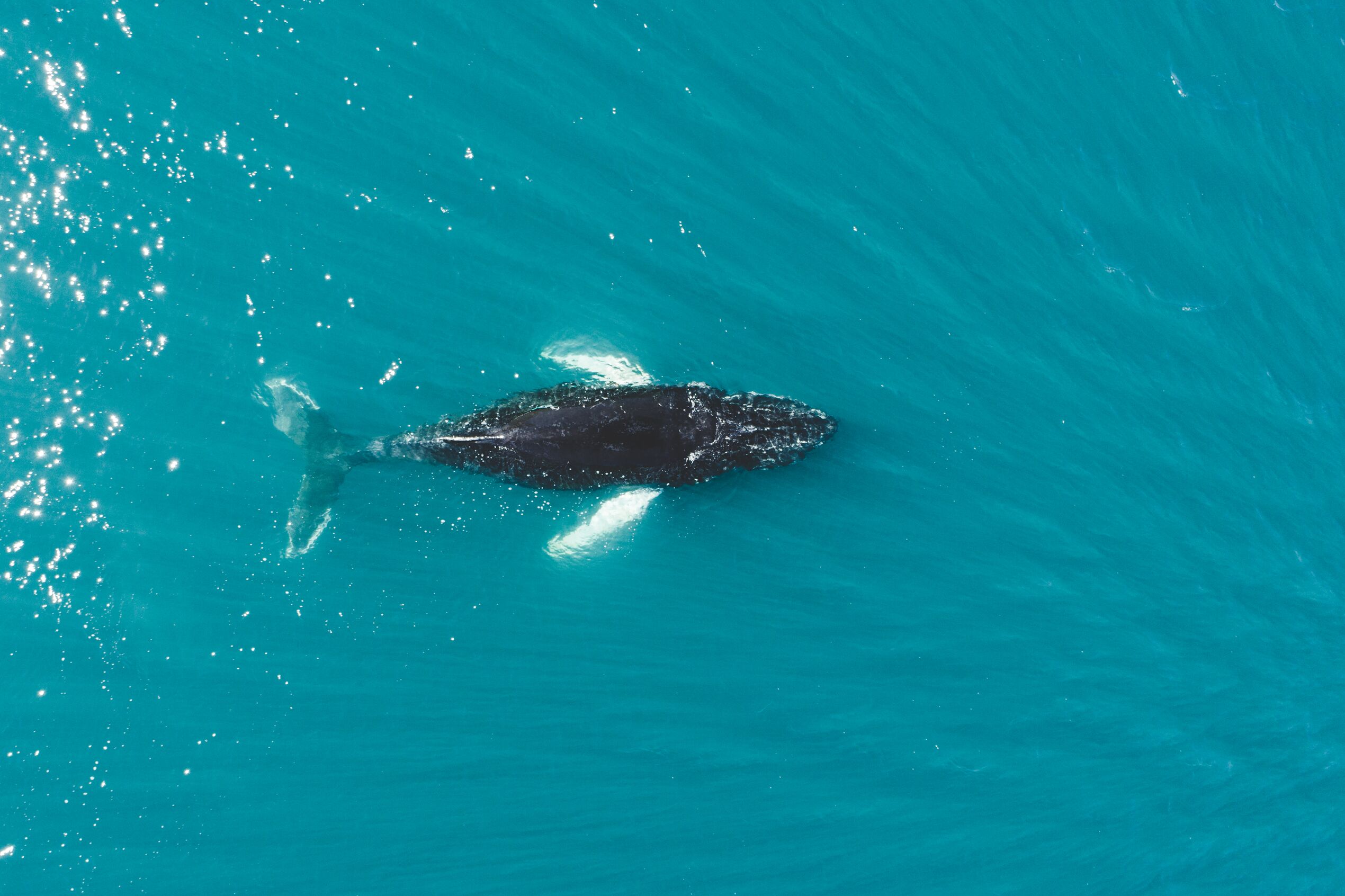 The best time to see whales in Iceland is from April until September, when several species of cetaceans (whales, dolphins, and porpoises) are frequently spotted. Tours report more success seeing the bigger whales during the summer months, as this is when they travel to Icelandic waters to feed.

Summer is often the most comfortable and reliable time to go on a whale-watching tour. Departure times are more frequent thanks to long daylight hours, and the weather is largely more agreeable – plus there’s the chance to see seabirds (including puffins, gannets, gulls and arctic terns) in their feeding grounds. Puffin season in Iceland runs from April to mid-August.


Whale-watching tours are less frequent in the winter months (October to March), and only a few harbors have year-round tours –  primarily Akureyri in the north, and Reykjavík. The tour season begins around mid-February from Ólafsvík on Snæfellsnes, lasting through September. In Húsavík, it's March through November. Winter tours come with challenges, but also with the bonus of beautiful snowcapped mountain scenery, long-lasting sunsets, and possibly even the chance to see the northern lights.

The chance of seeing blue whales in Skjálfandi bay (from Húsavík) is highest around June, while the season for orcas (killer whales) to feed around Snæfellsnes extends from February through June. Minke, humpback, fin and pilot whales are commonly seen in summer and into fall.

White-beaked dolphins and the harbor porpoises don't migrate, and so stay around Iceland year-round. These are the 2 most commonly sighted species during the winter months.


What is the best time of day to see whales in Iceland?

When it comes to the best time of day to see whales (morning, afternoon, or evening), there is no definitive answer. One leading operator in North Iceland says that 'afternoon and evening tours are usually less busy, and you get a chance to see whales in a spectacular sunset'. Some operators have late departures in June and July (around 10:30pm), offering whale watching under the midnight sun.

Where to go to see whales in Iceland

You could get very lucky and spot whales from land, especially from higher vantage points on coastal hikes, or driving along fjordside roads. You might even get lucky and see one on a kayaking trip, or from a geothermal spa (as has been known in Húsavík)!

Across the country, a number of companies offer classic whale-watching boat tours, spending about 3 hours on the water. The type of boat varies, from old oak schooners to RIB speedboats that can cover a lot of ground. Beyond the straight-up 'classic' tours, many companies offer combination tours – maybe whales plus puffin-watching, or some time on the boat for sea-angling and catching your dinner. Tour company websites explain options, and usually outline what to expect. The companies also often run social media accounts that talk about what's been seen on the water in recent days.

Tours operate from the following towns:

Reykjavík: There are year-round tours from the capital’s Old Harbor, and all sorts of combination tours, too. Tours look for whales in Faxaflói bay, where the main species are white-beaked dolphins, minke whales and humpback whales. Check out the Icelandair tours we offer for whale watching in Reykjavík.

Ólafsvík: The Snæfellsnes peninsula offers the best chance to see to see toothed-whales such as orcas, sperm whales, and pilot whales. Tours generally operate from mid-February to September.

Hólmavík: This Westfjords sport offers unique whale watching in a remote and unspoiled part of Iceland. Humpback whales are the most commonly seen species, and tours run from mid-June to mid-October.

Akureyri: At the southern end of Eyjafjörður, the longest fjord in Iceland (some 60km or 37 miles long), Akureyri is the main town of North Iceland and home to year-round boat tours of the fjord's waters – a favorite for humpbacks, among others.

Hauganes: Not far north of Akureyri is this small fishing village, where whale-watching tours were pioneered in 1993. Tours cruise Eyjafjorður; humpback and minke whales, dolphins and porpoises are commonly spotted.

Hjalteyri: Another tiny village offering tours on Eyjafjörður from June to September.

Dalvík: Similar to nearby Hjalteyri and Hauganes, tours from picturesque Dalvík operate on Eyjafjörður and run from around mid-May through September.

Húsavík: This beautiful town on Skjálfandi bay has claimed the title as 'the whale capital of Iceland'. Four companies offer tours here, with the season running from March through November. There's a 98% success rate for spotting whales on tours. Stop in at the Húsavík Whale Museum, too.

Vestmannaeyjar: Something a little different! On scenic Vestmannaeyjar (also known as the Westman Islands), the Beluga Whale Sanctuary is home to 2 sweet female beluga whales retired from a Shanghai water park. The sanctuary can be visited from April through October. 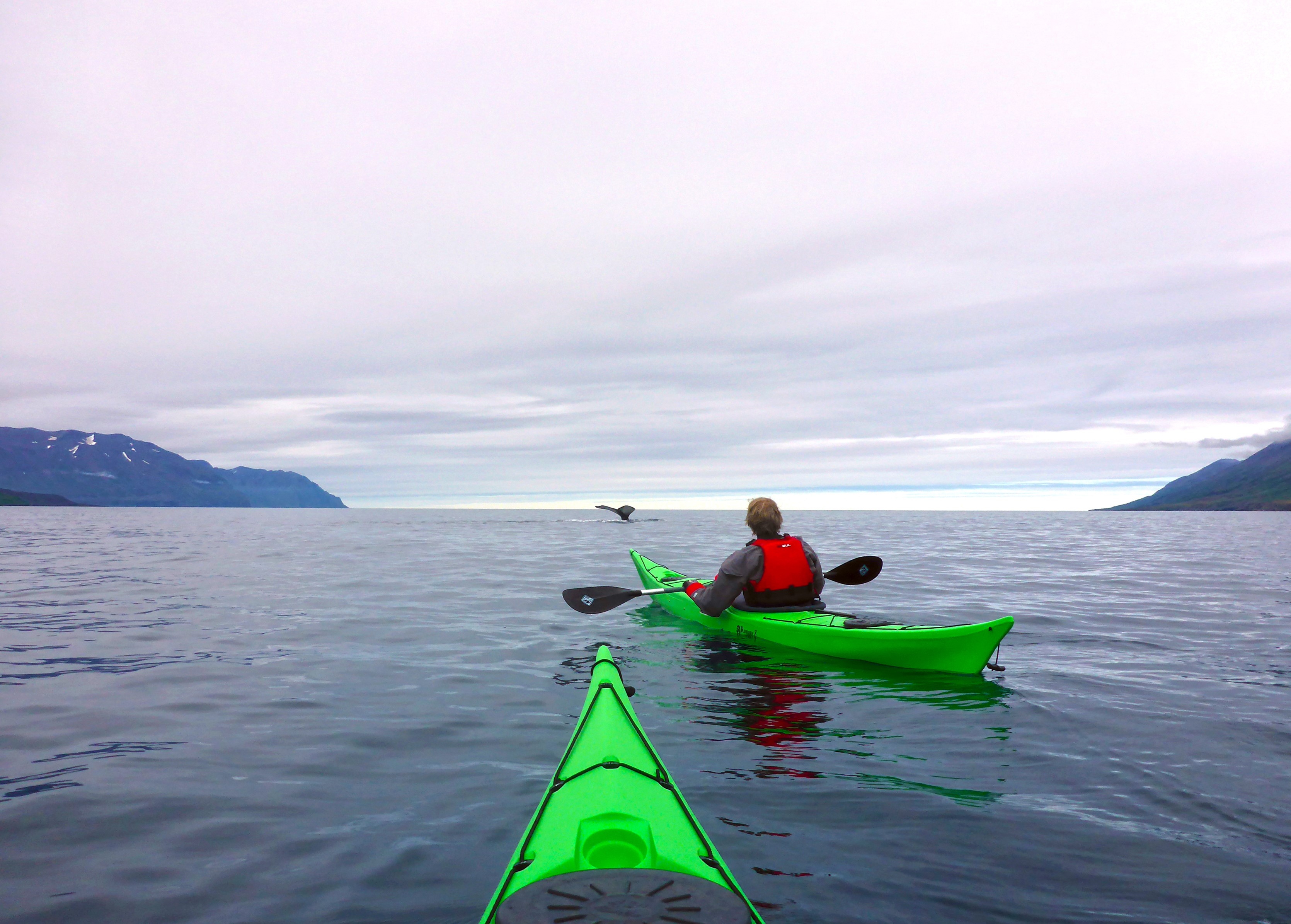 Whether you're planning your first trip to Iceland or are returning to your favorite places, book a whale watching tour today for a chance to see these majestic creatures in person.