Film director Hlynur Pálmason (pictured above) loves his country. Iceland is spectacular and beautiful, but it is also rough and unforgiving. Thus, his latest film 'Godland' is both a love letter, and in some ways a hate letter, to the country in which he was born.

The film was presented in the Un Certain Regard section at the 2022 film festival in Cannes, and has won various awards at a selection of film festivals throughout 2022.

It's also part of the Feature Film Selection of the European Film Awards, to be hosted in Reykjavík on December 10, 2022.

'Godland' is released in Denmark in December 1, 2022, and has release dates in other countries over the following months. See more on the IMDb website. 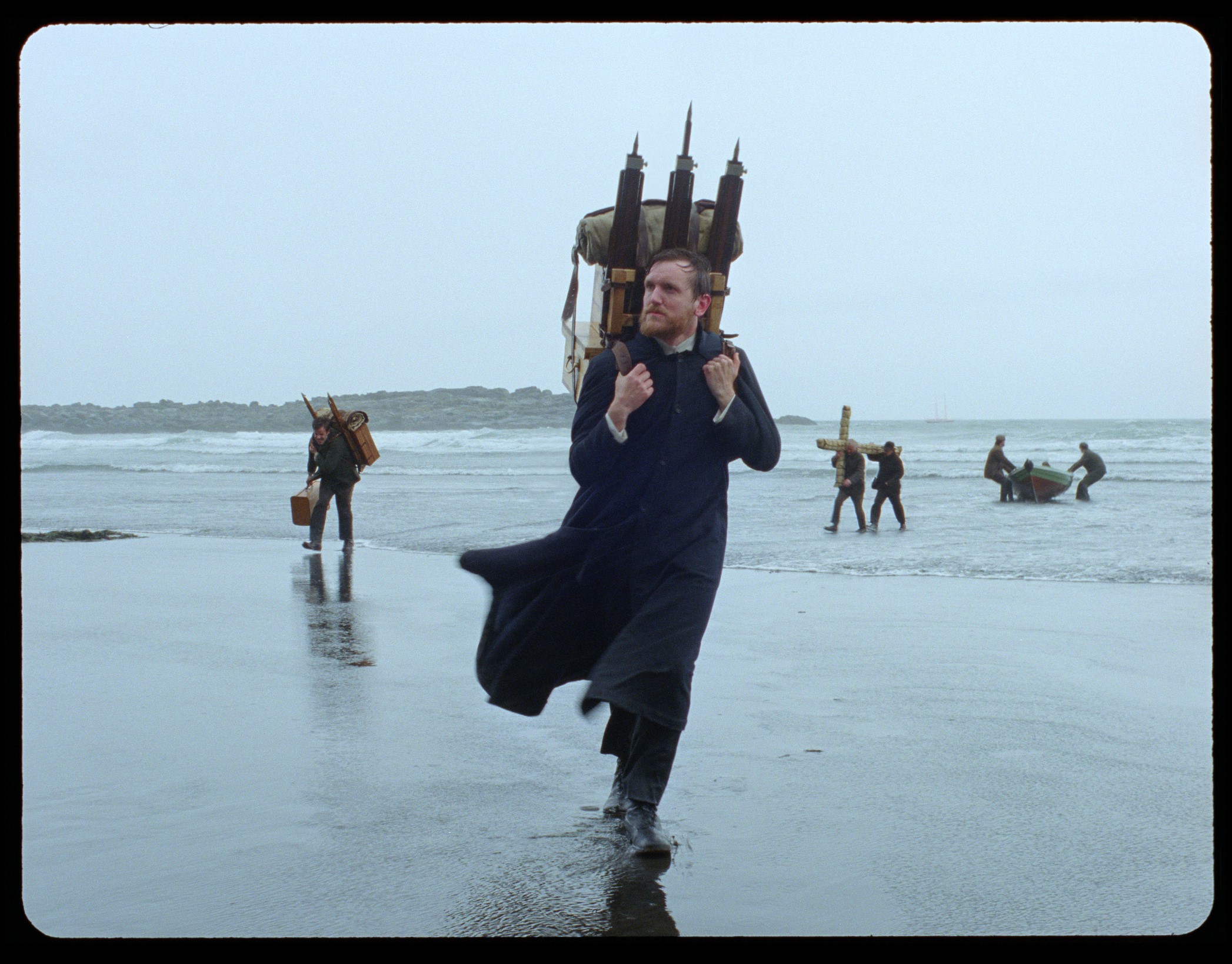 Godland: a Danish mission in Iceland


'Godland' follows the idealistic Lutheran priest Lucas (Elliott Crosset Hove) as he is sent to Iceland by the Church of Denmark at the end of the 19th century, with the goal of establishing a parish and erecting a church, as well as photographing the people. Initially he has a romantic idea of learning the language and exploring the countryside of this beautiful but harsh country, but he soon discovers that Iceland is nothing like he thought it would be.

When Lucas is traveling across the Icelandic countryside in 'Godland', he does so with the help of a local man, Ragnar (Ingvar Sigurðsson). Along the way, he discovers that he's not able to deal with the natural challenges in the same way as Ragnar, and a love-hate relationship develops between the men.

Lucas loses his interest and appreciation of the Icelandic culture as represented by Ragnar, whose interest in speaking the Danish language (that he does master to some degree) is lacking. Thus, the two men hardly comprehend each other. At one point Lucas reaches out to God for help: “It is not going as planned, I can’t go any further,” he says as his body is giving up and he seems to be about to lose his mind.

Barely surviving the trip, Lucas reaches his destination with Ragnar’s help, and stays at the house of fellow Dane Carl (Jacob Hauberg Lohmann), where he recovers. Carl has two daughters: teenager Anna (Vic Carmen Sonne) and younger Ida (Ída Mekkín Hlynsdóttir), who befriend Lucas and show him the more hospitable side of Iceland. They are fellow Danes who have learned to cope in the country – this is especially the case for Ida, who is at home with nature and animals.

An interview with director Hlynur Pálmason

What inspired you to make this film, about the relationship between the Danish priest who comes to Iceland on a mission and the Icelandic people he meets here?


I am Icelandic and I grew up in Iceland, but I lived in Denmark for a long time and I brought up my children there, so I am kind of in between countries. Not that long ago, we [in Iceland] were under the Danish crown – until the Second World War. So there is a lot of history there. I wanted to work with these opposites, which is not only in history terms between Denmark and Iceland, but also in terms of language and the miscommunication between these people. You never know who understands whom and how much the characters know, because he [Lucas] speaks Danish and he doesn't understand Icelandic, but you're not sure how much they understand of each other. It becomes this big miscommunication between the two of them. 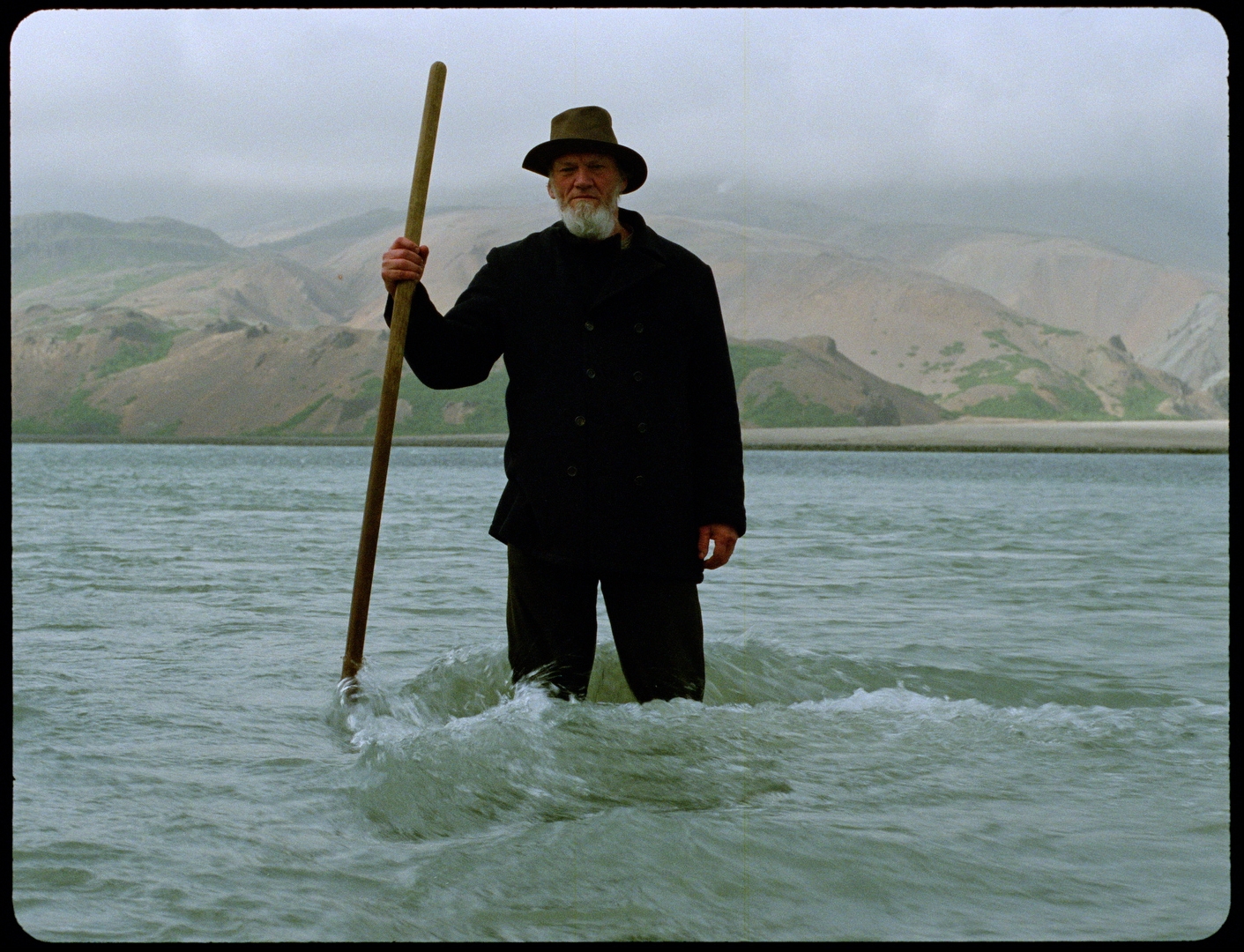 What was fascinating about it?


I started working on it [Godland] in 2014, so it is a long process, and for me it is always about the exploration of it and the discovery. I read a lot of travel books and I was interested in both with people who came to Iceland and traveled around Iceland, and many of them were actually quite negative when they were talking about the Icelanders they met on their way and also about how harsh it [the country] is. But I really tried as much as I could not to do too much finger-pointing. I was mostly playing with it – from both sides, so hopefully there is no good guy or bad guy. It is two-sided – everyone has a good side and a bad side.

How much research did you do on the missionaries going to Iceland from Denmark?

It [Godland] is definitely a fictional story. There are a lot of details that come from real events, but it is fictional. I created Lucas as a Lutheran priest maybe because I was brought up a Lutheran. I'm not religious but the Lutheran church was having a conflict with the Catholic church during that time, but a big part of Iceland was still heathen so they were trying to get them in the right church, so there is rich history within that. But it was usually Icelandic priests who were used for this. They studied in Denmark and went back to Iceland and worked for Denmark there. Then the Danish priests would come to Iceland and make sure everything was going well.


It is beautifully shot but it is almost like a love and hate letter to Iceland. What was it like exploring your country while shooting this film?

It'is good that you say love and hate, because the title of the film is Vanskabte Land in Danish and in Icelandic it's Volaða Land and in English it's Godland, so it's three different meanings and three different names. It has been very difficult to find the exact words for it. But it comes from a poem by Matthías Jochumsson, who studied in Denmark, moved back to Iceland up north and experienced a crazy cold winter there, where the whole fjord froze up and kept frozen until late summer, so it didn't even have a chance to melt before the next winter. So he wrote this hate poem about Iceland, and the poem is called Volaða Land, where he shit-talks Iceland for a long time and he basically says that it is unlivable, it is unforgiving and terrible. It is a shitty land. And he did not want to publish it, so he sent it to a friend and his friend loved it and put it out there.


The poet was cancelled by the government and he had to write a love poem to Iceland. So it's about both the beauty and the brutality of it, but it's connected to both Iceland and Denmark, and if you really are passionate about something, you sometimes speak harshly about it. I'm not afraid of saying something about my own place – like shit-talking your own town or country. Being critical about it is very important. I try to be that with both Iceland and Denmark – not leaning on either of them but working with these opposites and being playful with it. The girl is half-Danish, half-Icelandic. He talks Danish on Sundays, all of these things.


What about filming the landscape: Is it hard not to create a cliché of the extremely beautiful Icelandic landscape?


If you see shoots from Iceland, you will see that they are shooting in very specific places: the glaciers, the lagoons and all the known postcard places. But I am shooting in places where I come from; the places in between those places. I think that is important, because some of the places we shot, it is impossible to get there by car; you have to go there by horse. You cannot go there on any horse. The horses have to have gone there before and have been brought up that way, because normally you cannot take horses on those mountain paths, so they have to be brought up going there.


I tried to use the things around me. It's shot where I grew up. The place where Lucas becomes earth is shot where we pick mushrooms. The places where the horse is, is my father’s neighbor’s land. So it is around where I grew up. It is not locations but spaces that I know, visit and revisit. So the script is written with these places in mind. 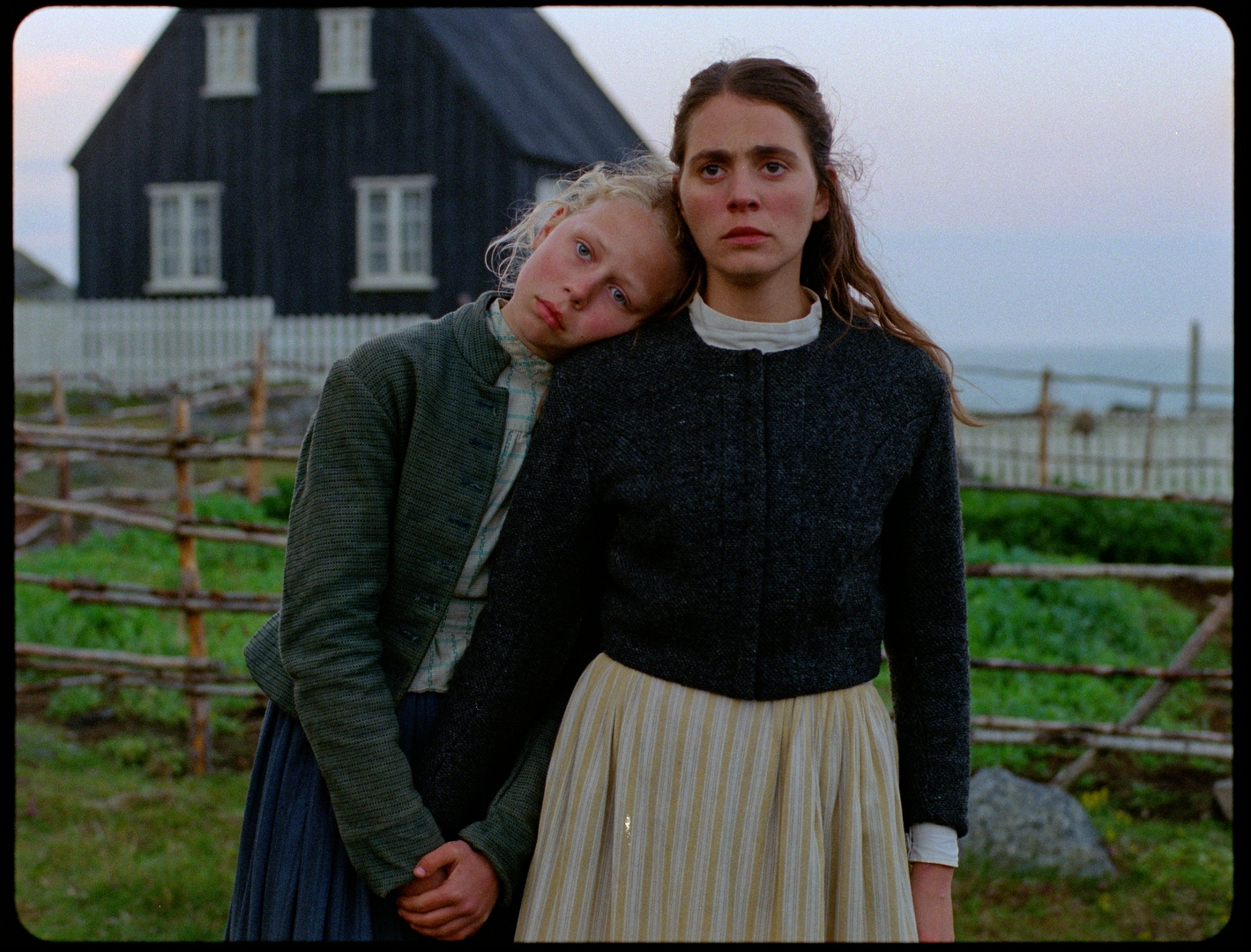 Your daughter plays the character of Ida in 'Godland' and she was also in your film 'A White, White Day' (2019). It seems that Ida is the one character that seems to get both worlds – the Danish and the Icelandic.


She is like the better part of both. She is playful. She is close to nature and she is close to the animals. She plays the piano and she is part of the modern world and Danish culture, so I wanted her to be this in-between in the film. If you put all the characters in the film and they are either Danish or Icelandic, she stands right in the middle with a line through her. She was kind of always there, when I was writing, she came in and she went out but that was the idea: I like the idea that she was in the middle.


You mentioned that you lived in Denmark. When you've been abroad for a while and you come back, how do you see Iceland with different eyes?

But coming back home is always so familiar. It is my roots. It is so familiar and it's so natural. So I'm not shocked or surprised in that way. It's just strangely familiar – it's like a natural habitat. So I think that especially with this film, I try to show what is around me and as truthfully as possible, and not trying to paint only beautiful pictures.

What does it mean for you to be Icelandic?


I see myself as divided. In many ways, I see myself as being neither Danish or Icelandic, but as something a little bit in-between, sort of like the character Ida in the film. I am 50/50 in a way. But I don’t even know if that is true and if that makes sense. A lot of people feel that they are somehow misunderstood or that it is hard to explain yourself or communicate, and I think that being in-between countries is a big part of that.

Can you talk about the last scene, where you play the Danish song by Hans Christian Andersen 'I Danmark er jeg født' ('In Denmark I was born') and show the Icelandic scenery at the same time. That brings out very conflicting emotions. Why did you choose to do this?


I think it's a beautiful song, so it's not meant in a cynical way. I understand why people would think so, but what I liked about it is that you have a Danish person coming to the land and he kind of ends up lying in the landscape, and it is a foreign landscape, and it feels foreign when you see him there alone. Time goes by and the seasons come and go and I felt there was something very emotional about seeing him there but hearing a Danish song that brings him back to Denmark.

The song is talking about the beaches and the traditional things in Denmark in a very beautiful way. So having him there alone in Iceland just gave me an emotional connection to it. For me, that was the most important thing. But I also like the opposite: that it vibrates because of this contrast. 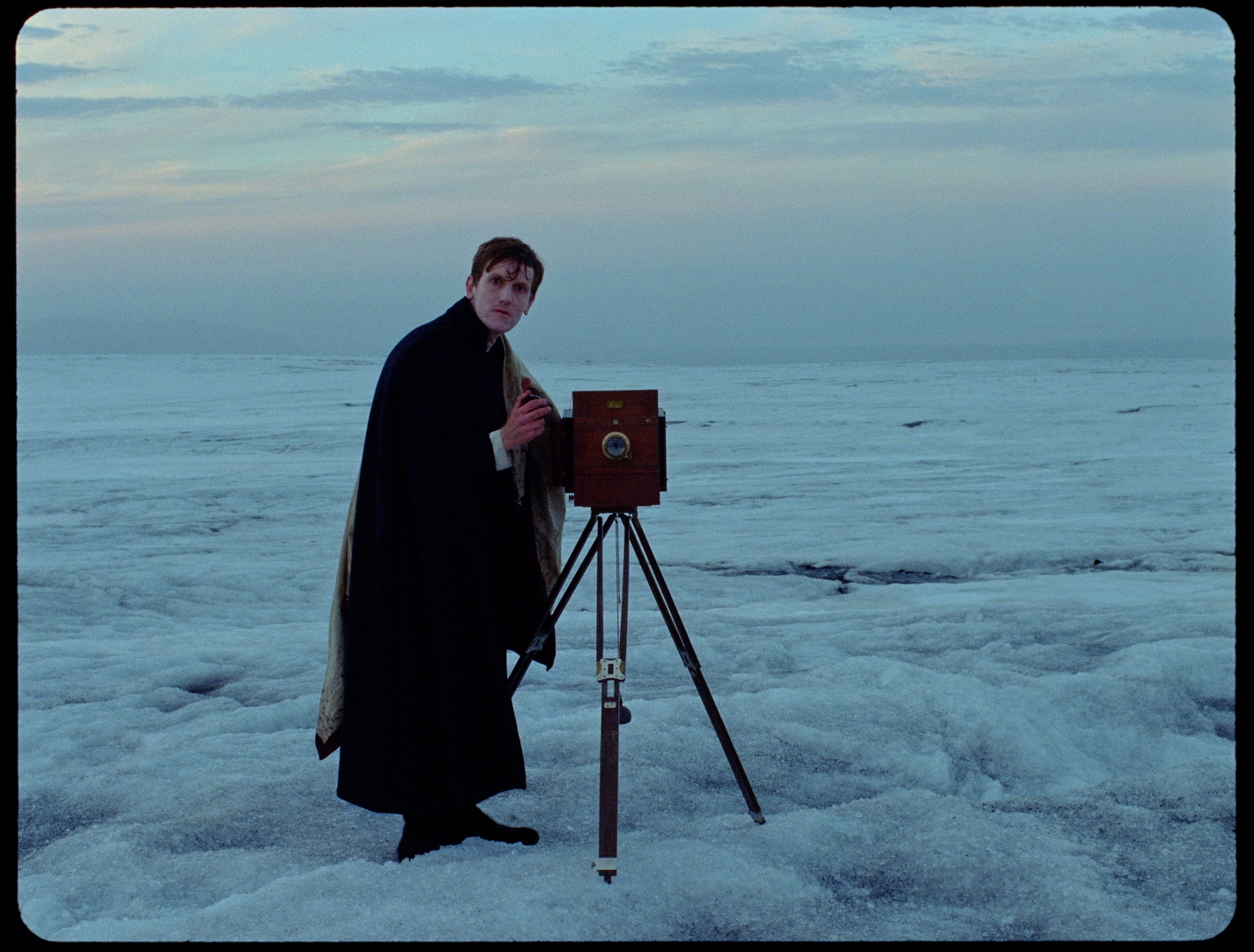