Map Out Your Magnets 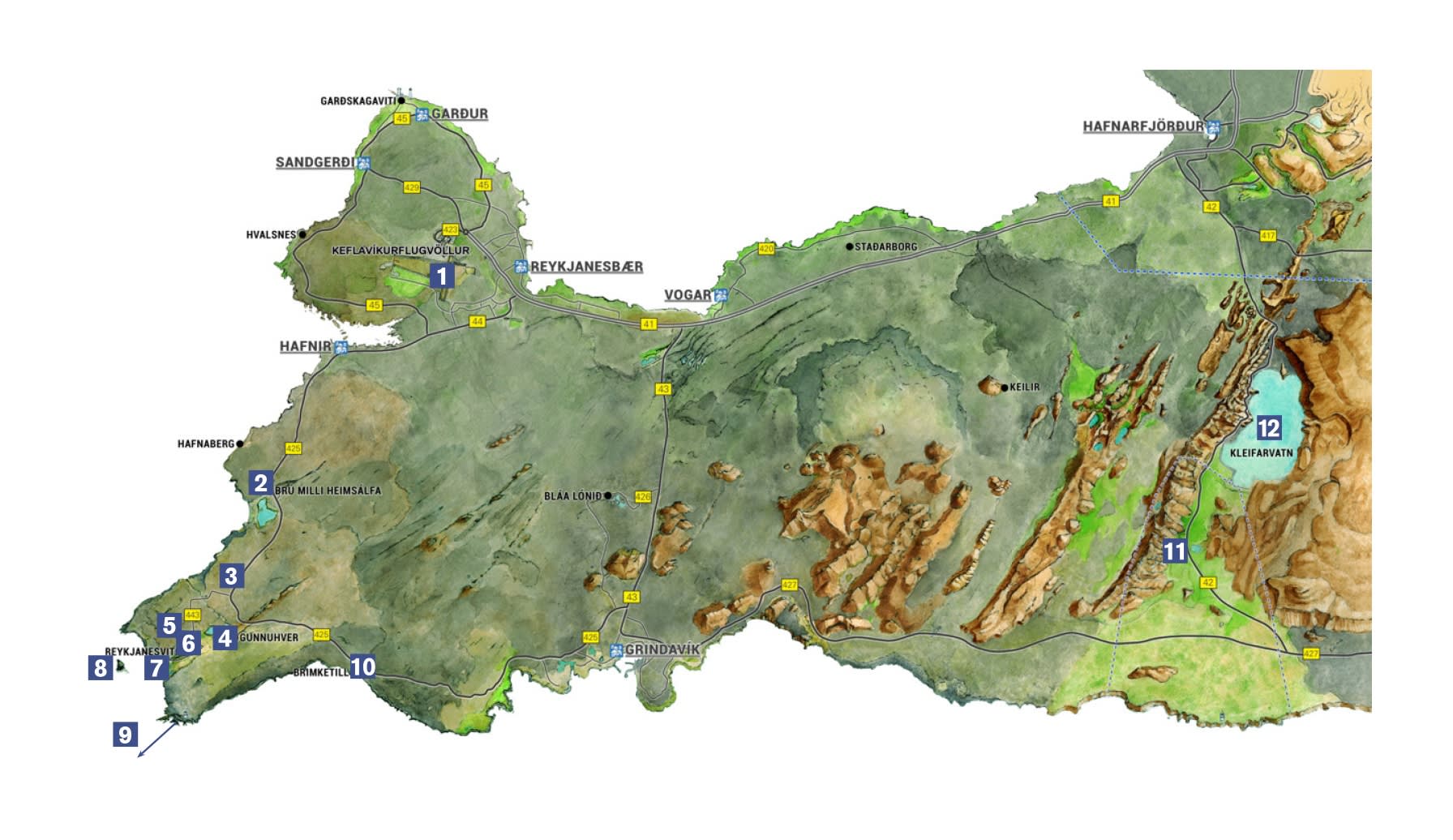 1. Keflavík International Airport – The main gateway to Iceland with about 96% of international traffic. The Blue Diamond tourist route loops from the airport.

2. Bridge Between Continents – Built as a symbol for the connection between Europe and North America, the small footbridge lies across a fissure created by great forces underneath the Earth’s crust that pull the Eurasian and North American tectonic plates apart.

4. Gunnuhver – The largest mud geyser in Iceland is named after a 400-year-old poltergeist. The ghost of Gunna wreaked havoc until a priest trapped her in the boiling hot spring. Her spirit still haunts it, so beware! Also, locals used to bake bread in the hot ground here.

5. Stampar – A series of craters created in two eruptions, about 800 and 2,000 years ago. The two craters closest to the road at the north end of the crater row date back to the “Reykjanes Fires” (1210–1240). Walk inside a living volcano and take in the view of the lava fields, or, if you have time to spare, follow the signposted “Hundred Crater Trail” into the lava.

6. Reykjanes Lighthouse – One of Iceland’s oldest lighthouses stands stately on Bæjarfell; its light signal at 226 ft (69 m) above sea level. Its predecessor— constructed on Valahnúkur in 1878—was the country’s first; the lighting equipment a gift from Frederick VIII of Denmark. His visit in 1906 is considered to mark the start of tourism in Iceland.

7. Valahnúkur – Formed in a single eruption when 2,192°F (1,200°C) hot lava rapidly cooled down in the cold sea, Valahnúkur is an easy hike, offering splendid views across Reykjanes and the Atlantic. The beach next to it is filled with boulders tossed ashore by wild waves.

8. Karlinn – “The Man” is a 164-ft (50-m) high crater tap that stands majestically in the ocean off the beach by Valahnúkur. There used to be a “Kerlingin” (“The Woman”), but she washed away into the ocean a long time ago and the poor widower has been alone since.

9. Eldey – About 9.6 miles (15 km) off shore, “Fire Island”—one of the world’s largest gannet colonies—rises 253 ft (77 m) out of the sea. Eldey used to be home to the now extinct great auks. By Valahnúkur, a lone statue of the big flightless bird stands facing the island.

10. Brimketill – The small pool, naturally carved by marine erosion, can be viewed from a platform near Gunnuhver. The powerful surf is mesmerizing but equally dangerous, so keep a safe distance. The only one allowed to bathe in the pool is a giantess named Oddný.

12. Kleifarvatn – The largest lake on Reykjanes is at 318 ft (97 m) one of the deepest in Iceland and, according to legend, home to a whale-shaped monster! Due to earthquakes, water is slowly draining from the lake—it featured in a 2004 crime novel by Arnaldur Indriðason. 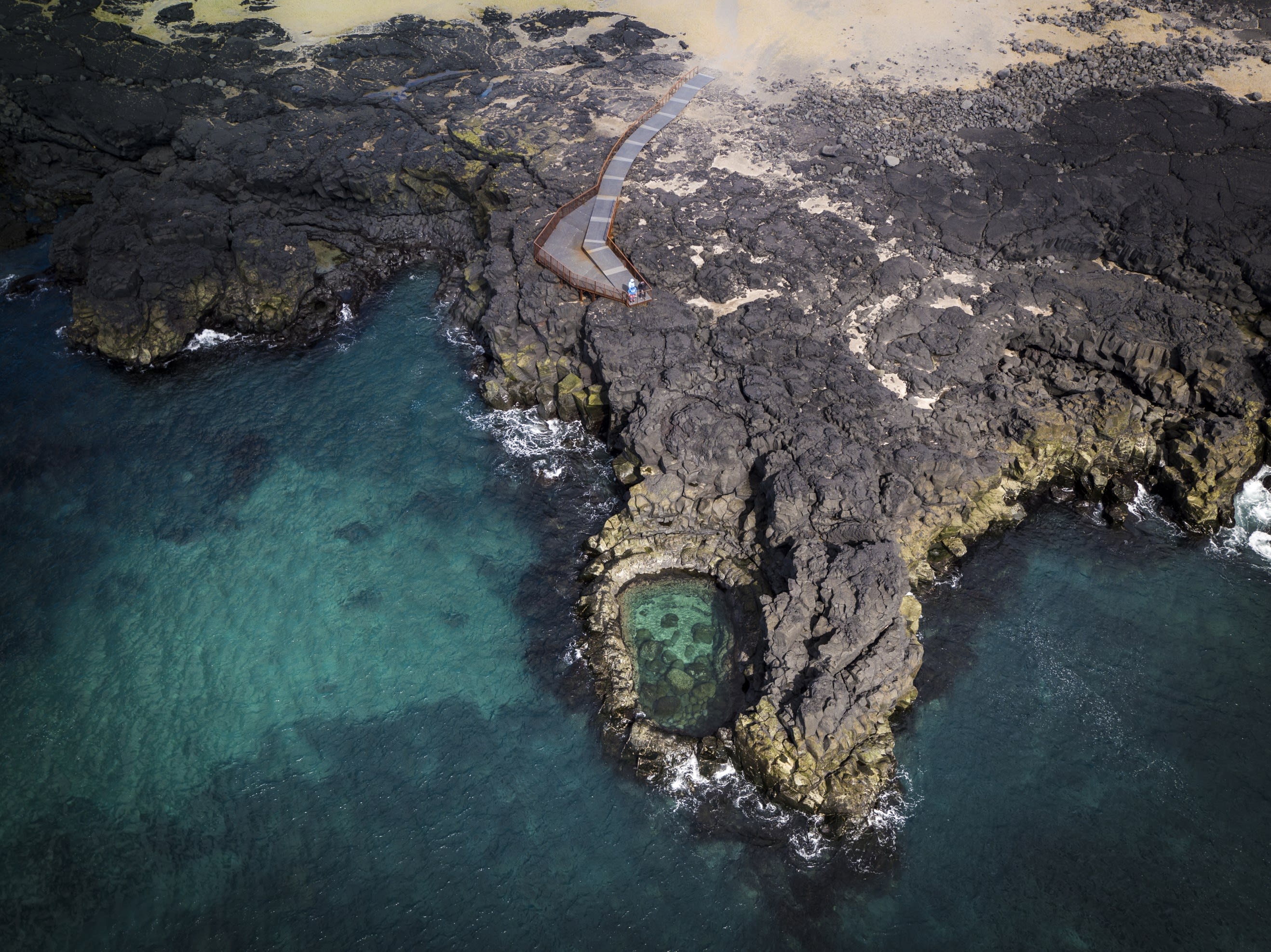