​Eco-cycling in Iceland: the quest for climate-friendly tourism

As climate change events echo across Europe, we take you on a bike adventure in one of the continent’s most remote destinations, where renewable geothermal energy breaks out of the mesmerizing volcanic scenery to help reduce travelers’ carbon footprint.


Text and photos by Stefano Valentino, founder of MobileReporter 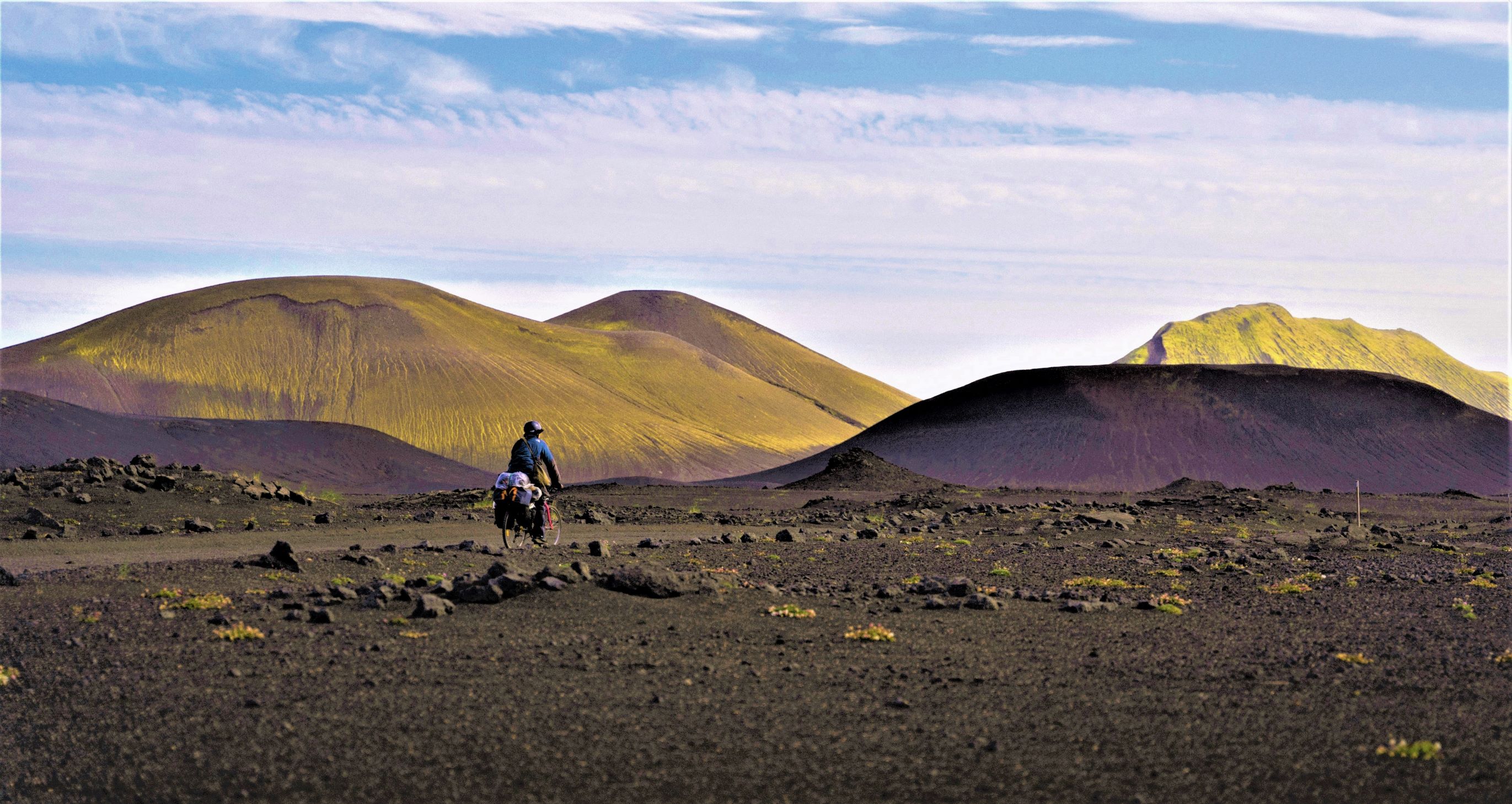 If you are obsessed with wild and (almost) carbon-free travel, then cycling in Iceland is your dream experience. It turns into a nightmare, though, when the icy wind from the North Pole nearly pushes you off the edge of roller-coaster-like tracks cutting through lava fields. Welcome to the world’s most heavenly hell.

These thoughts come to me while jolting up and down on the legendary Sprengisandur ("sandy trail") which runs north-south across the uninhabited heart of the country. Imagine the Earth's most unearthly place, where getting stuck with your tires in a soft layer of pebbles and hand-pushing your bike is a normal routine. Here you go. 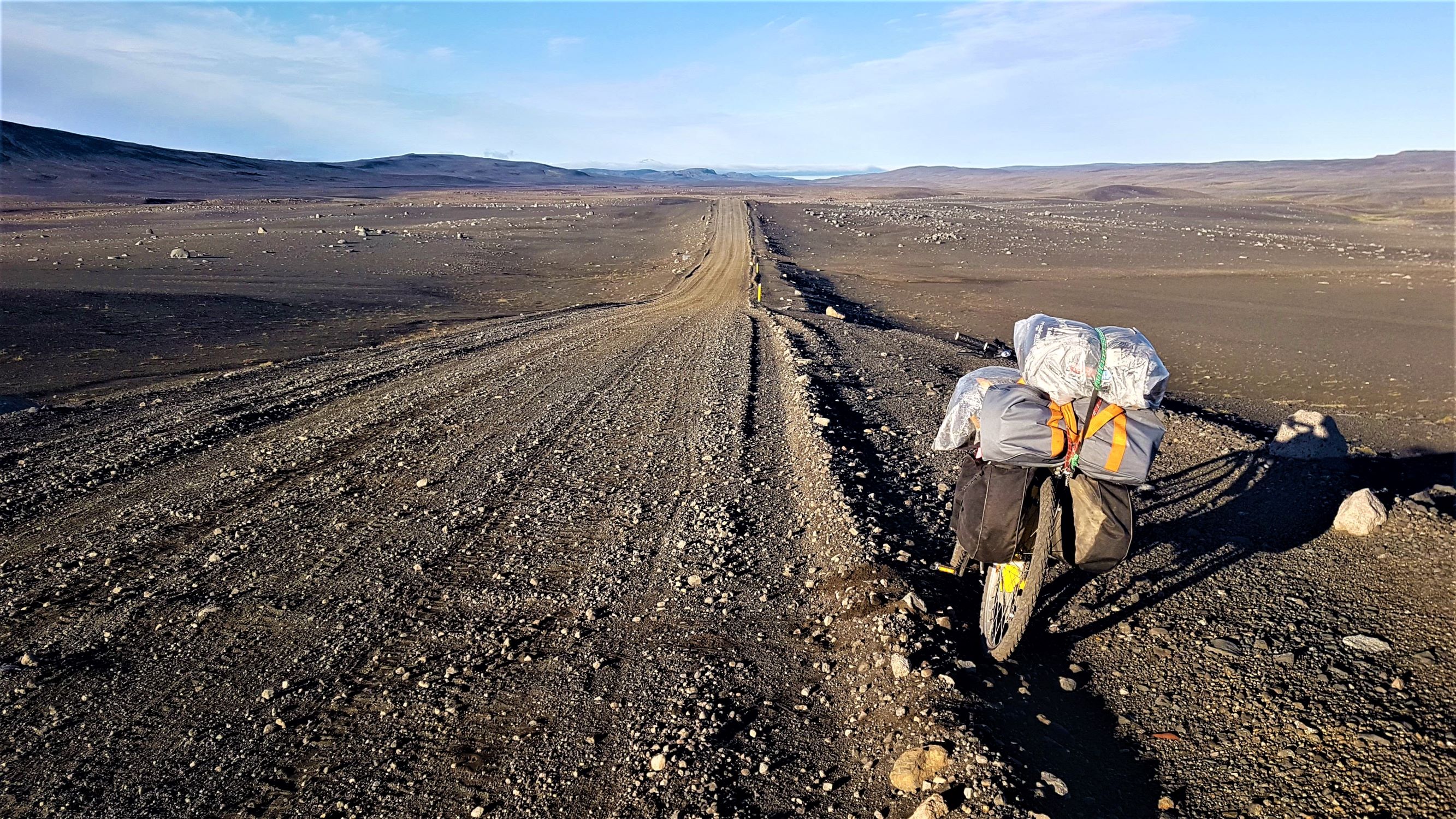 En route to the highland farm of Möðrudalur.

A hundred years ago I would have exclusively met horse caravans, now replaced by four-wheel vehicles packed with tourists staring at my sun-powered gears while overtaking me in a cloud of dust. The ride, which is a matter of hours to them, costs me a few, long, sweaty days. They capture with a few camera snaps all the glacial plateaus and crater ridges that I see growing bigger and bigger at my slow pace. I am compelled to shoot even the slightest change in the timeless and hypnotizing moonscape to convince myself that I am actually moving forward.

When I reach the rainbow-painted valleys of Landmannalaugar, I am halfway through my trip, which started a couple of weeks earlier in the capital city, Reykjavík. Even before touching the ground at the airport, I had set my climate-friendly adventure goal. While aboard the Icelandair aircraft, I questioned the flight assistants about my urge to compensate for the greenhouse gas emissions associated with my return ticket. They handed me a leaflet on the airline’s online program enabling passengers to offset their carbon footprint through supporting tree-planting (absorbing CO2). Greening my conscience was just one click away. 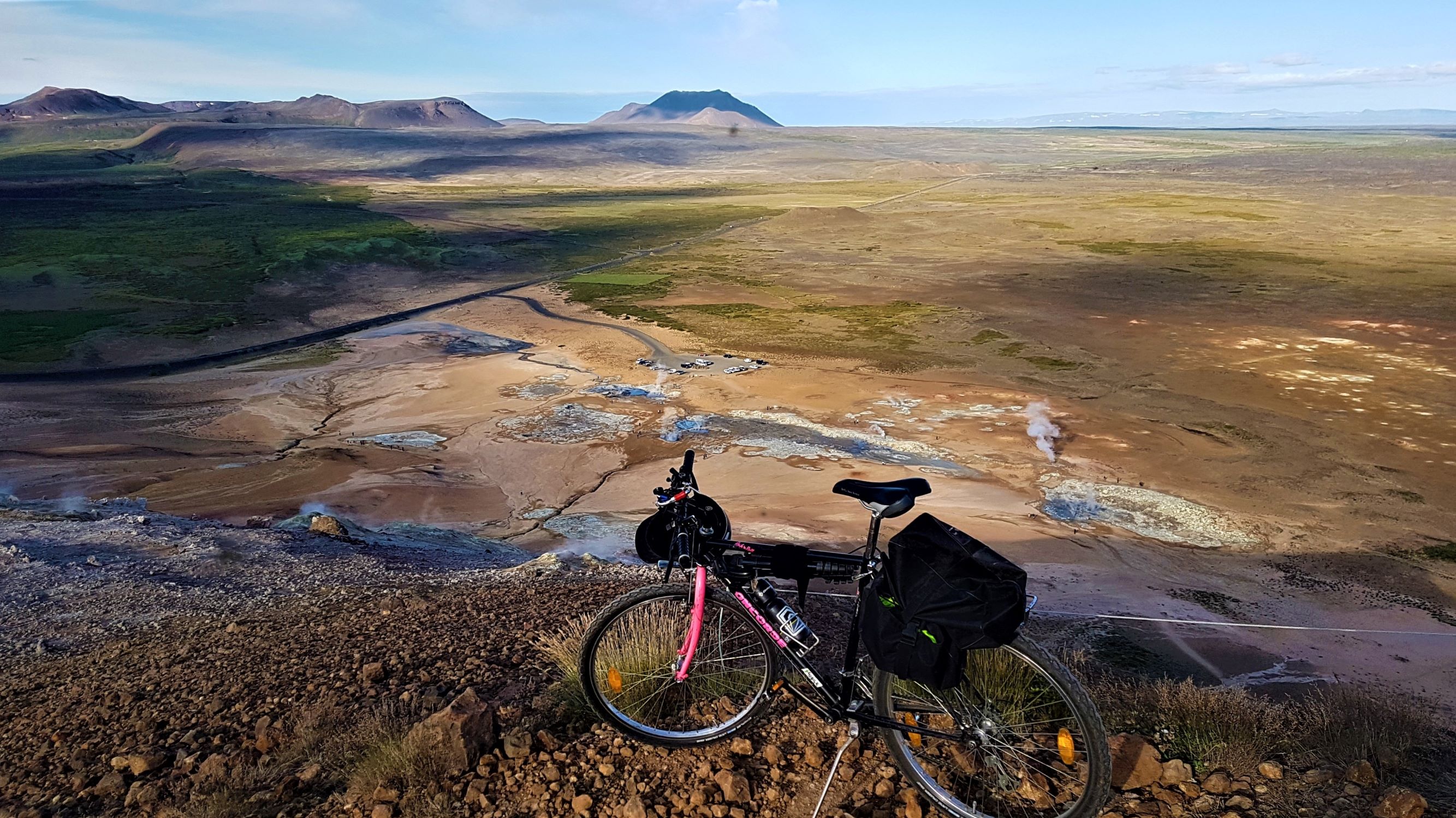 The view across Hverir geothermal area, east of Mývatn.

That’s how I learnt about the indigenous dwarf woods (so low that one just needs to stand up to see in the distance, as locals sarcastically explain). They have been the only erect forms of life since before the arrival of the Norwegian Vikings who, over the centuries, largely cleared them for firewood and sheep farming. But they are now being restored through reforestation initiatives.

I witness one of these resurrecting forests on the hilltops overlooking Þingvallavatn lake in Þingvellir National Park. I am stunned by the vast sights stretching in the direction of the canyon marking the Continental divide, where the European and North American tectonic plates connect. Along this line, the underwater Mid-Atlantic Ridge surfaced and opened up 60 million years ago, creating the stony backbone to which subsequent eruptions have attached the basaltic flesh of the island.

While showing me the seedlings of birch (the endemic species) lined up in the soil, the project manager, Ragnhildur Freysteinsdóttir (of the Icelandic Forestry Association), tells me that at least five of them need to grow for 60 years to capture the 0.5 tons of my flight-related carbon. But she adds that I should keep my fingers crossed since the shrubs are easy prey for sheep (outnumbering people), which in turn happen to be my favorite meal. If you ever taste slices of smoked lamb on buttered bread with one of the friendly farmers who invited me over during my cycling breaks, you will know what I mean. 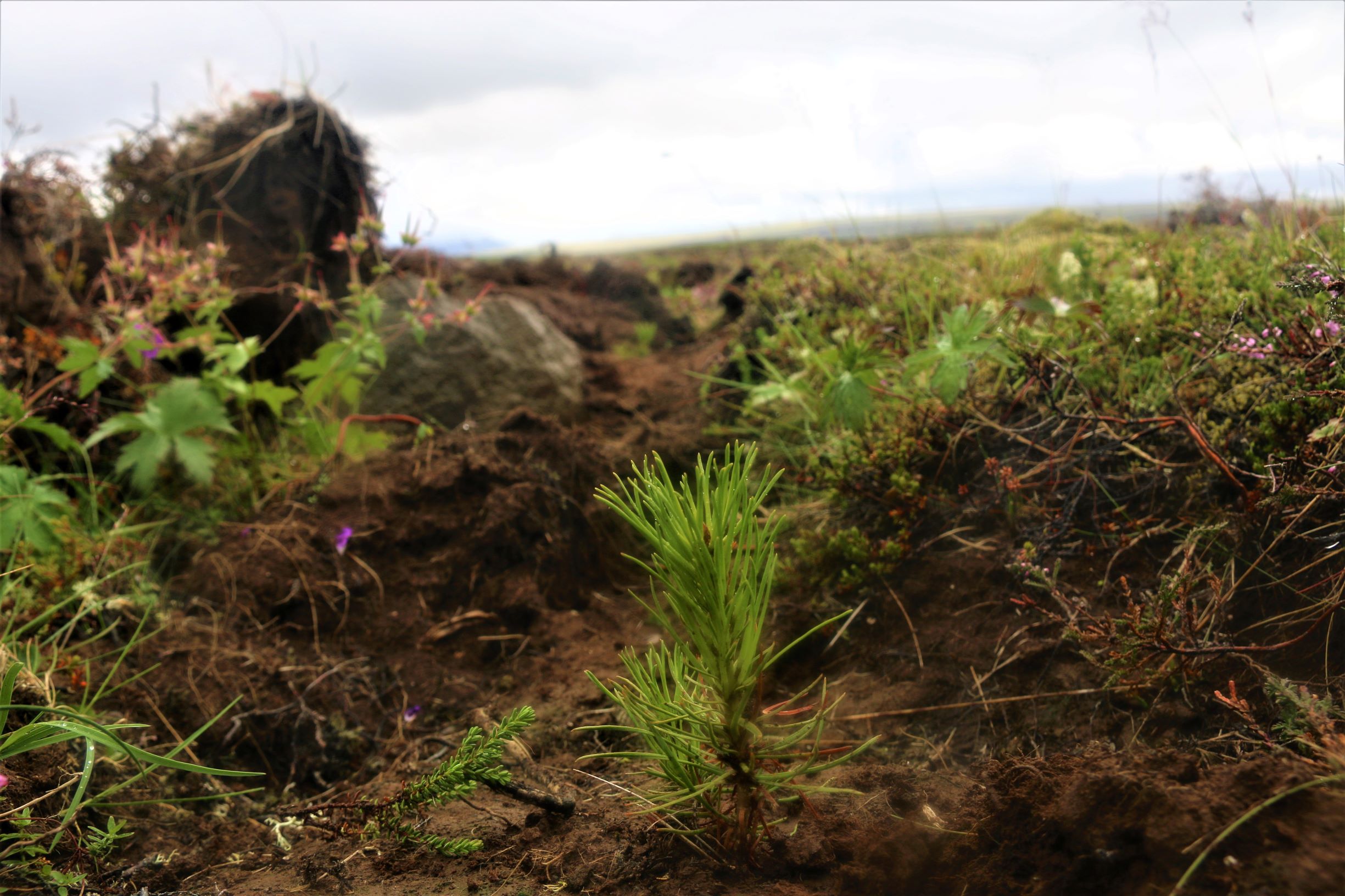 Despite having cleaned up my air and ground transportation, I still had to deal with the environmental consequences of my other activities: washing, cooking and powering my electronic gadgets. I would lie if I claimed that I shot all my photos thanks to my portable solar panel. Indeed, I used it half of the time as a shelter against storms.

The initial week, on Iceland’s South Coast, the brightest light I could spot was that of the torch I had to switch on at night to wipe the rain out of my tent. On route I stopped at Jökulsárlón lagoon where the mighty Vatnajökull glacier (one of the world’s largest) dies out into the ocean, slowly dissolved by global warming and the inner magmatic outbreaks. The clouds were so low and dense that the chunks of ice which rumbled down from the slopes seemed to float on a mystic fog rather than meltwater. 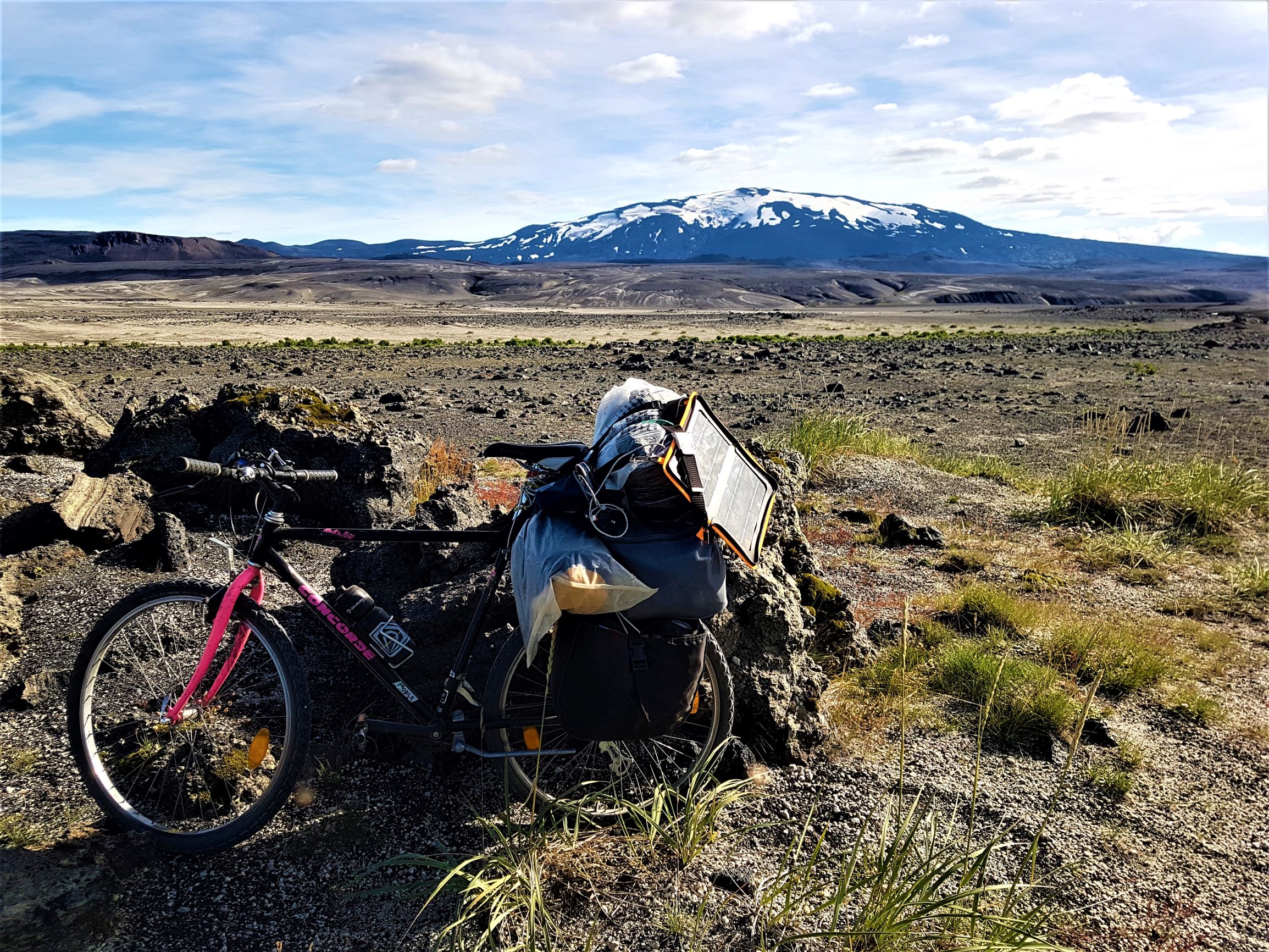 Solar panel soaking up sunrays, with Hekla in the background.

I decided to forget about my travel plans and trust the Icelanders’ tactic: zigzagging here and there according to the weather forecast. So, I went east. The long awaited sunrays sparked explosively during my descent to the town of Egilsstaðir from the (even less-easy-to-pronounce) Norðfjarðarvegur pass. My destination, as well as that of most bikers with whom I occasionally teamed up on the Ring Road, was farther north.

I could write endlessly about the well-known amazing places I admired in less than 300km: the Martian pumice plains surrounding Askja’s caldera (where the latest turbulence was recorded in 2019), the mind-blowing bubbling of Dettifoss waterfall, or the kaleidoscopic colors of Mývatn lake at sunset. 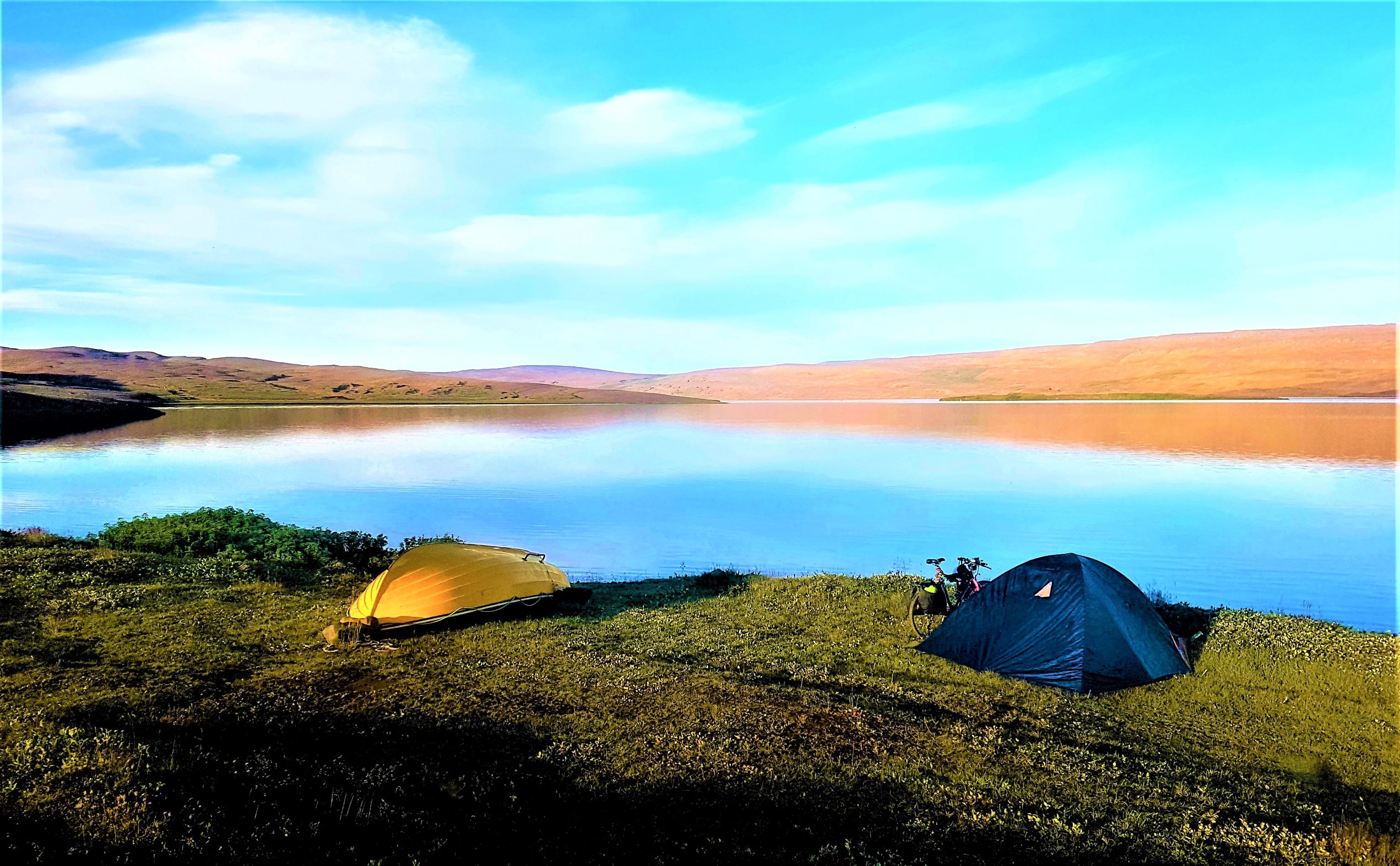 Lakeside camping along the Sprengisandur route.

However, I was drawn by something that travelers often overlook: the thermal power plant at Krafla. Set among Dante-esque sulfurous slopes, this is one of the facilities extracting heat from the volcanic ground and providing households, hotels, campgrounds, aluminum plants, sheep stables, indoor tomato farms, and me of course, with 90% renewable energy. As a matter of fact, the natives rely on the lavic time bomb ticking under their feet to power their ecological lifestyle, culminating in the unmissable hot-tubbing ritual. This geothermal miracle made my journey as sustainable as I hoped. 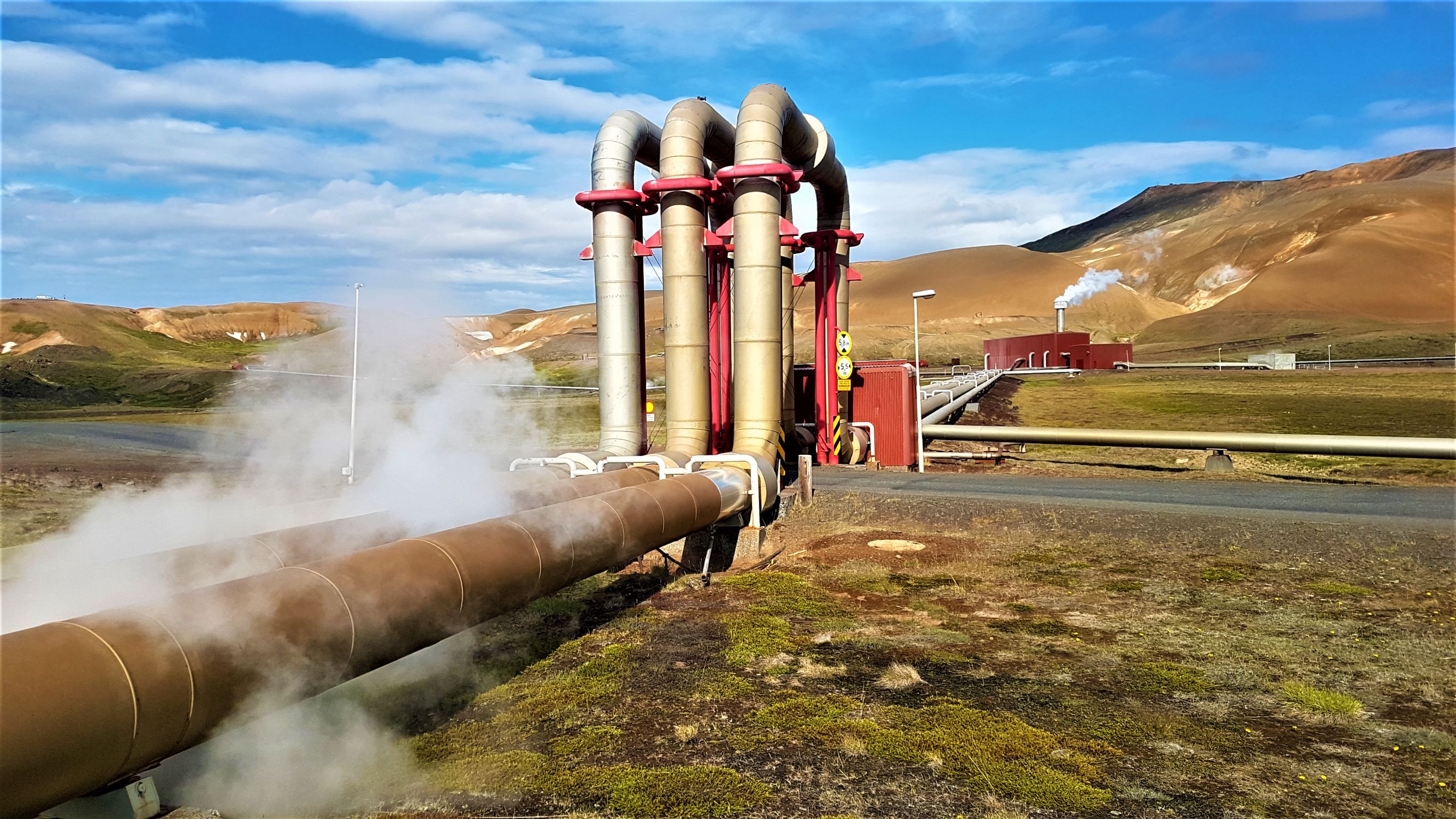 Pedal to paddle in the Westfjords

After the north-south crossing, I put my bike on a bus and then on a ferry (additional fossil fuels that I am now in debt to neutralize with extra tree-planting, provided the sheep don’t get too hungry). I land in the Westfjords, the most ancient and remote region. Had the gaps between its sheer cliffs not been bridged by the molten rock from the underworld, I would have spun in circles in a maze of isles in the Arctic sea. I continue pedaling up and down between snow-capped peaks and fishermen bays, following the winding coastline.

Eventually, my voyage comes to its epilogue precisely where Iceland ends. In Ísafjörður, the northernmost human settlement. I leave my two-wheeler (it is still there, in good hands, as a silent witness of my visit) and I embark on a kayak tour with master Veiga, the only adventurer who has ever paddled around the island against the current. This is going to be my last eco-exploration. Polar foxes and baby-tree-hunting sheep leave the scene to whales and nosy seals sticking their heads out of the waves to mock my clumsy paddling. 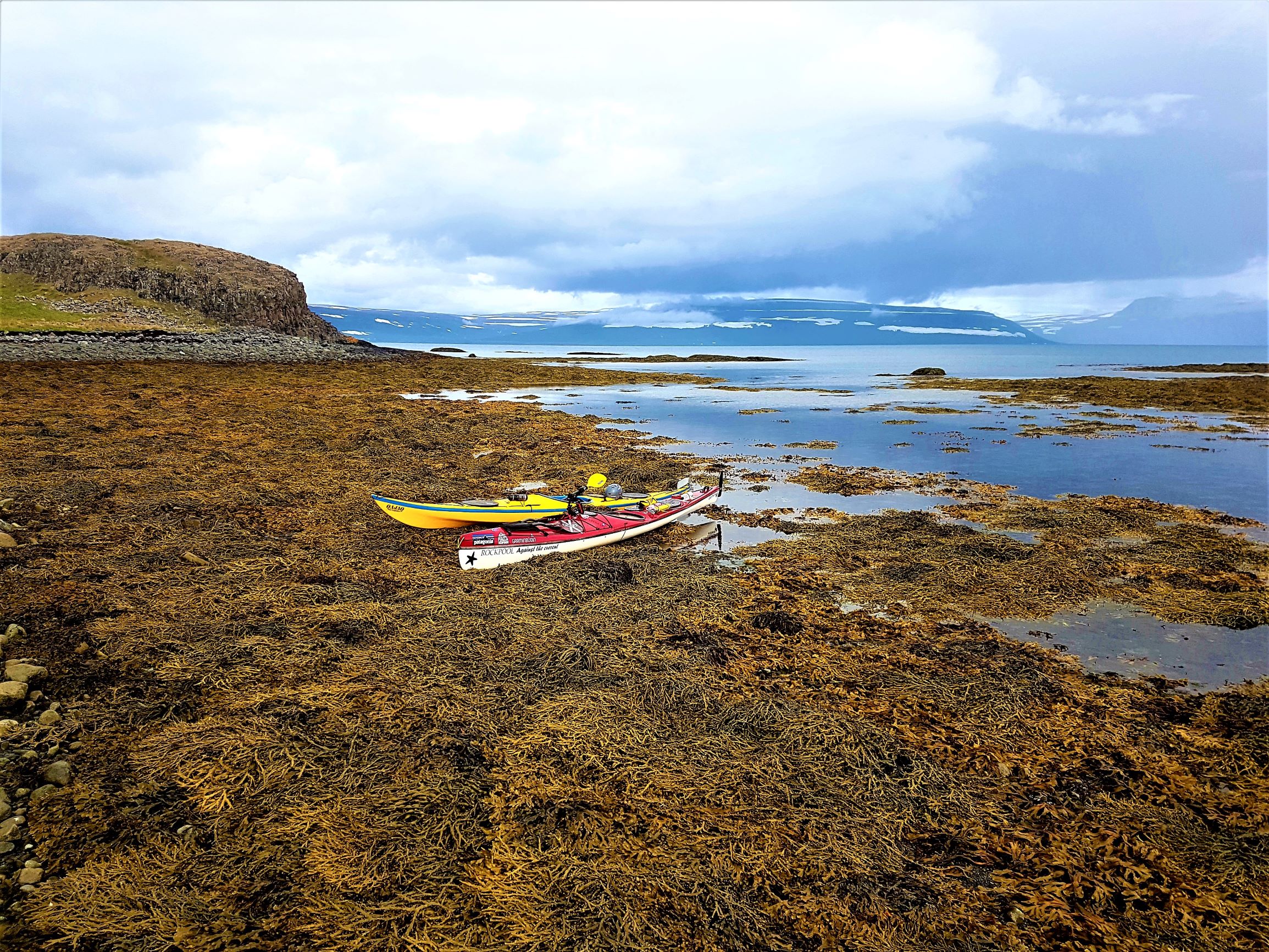 While drifting towards the harsh blackish reef, I empathize with the loneliness of the first men and women who set foot upon this unique universe of colliding geological forces. They endured frost and flames to make a new life. Today, except for the cities, the inhabitants here still live closer to volcanoes than to supermarkets. Nowhere else on the planet has nature, at the same time, threatened and sustained modern civilization in such a paradoxical fashion. 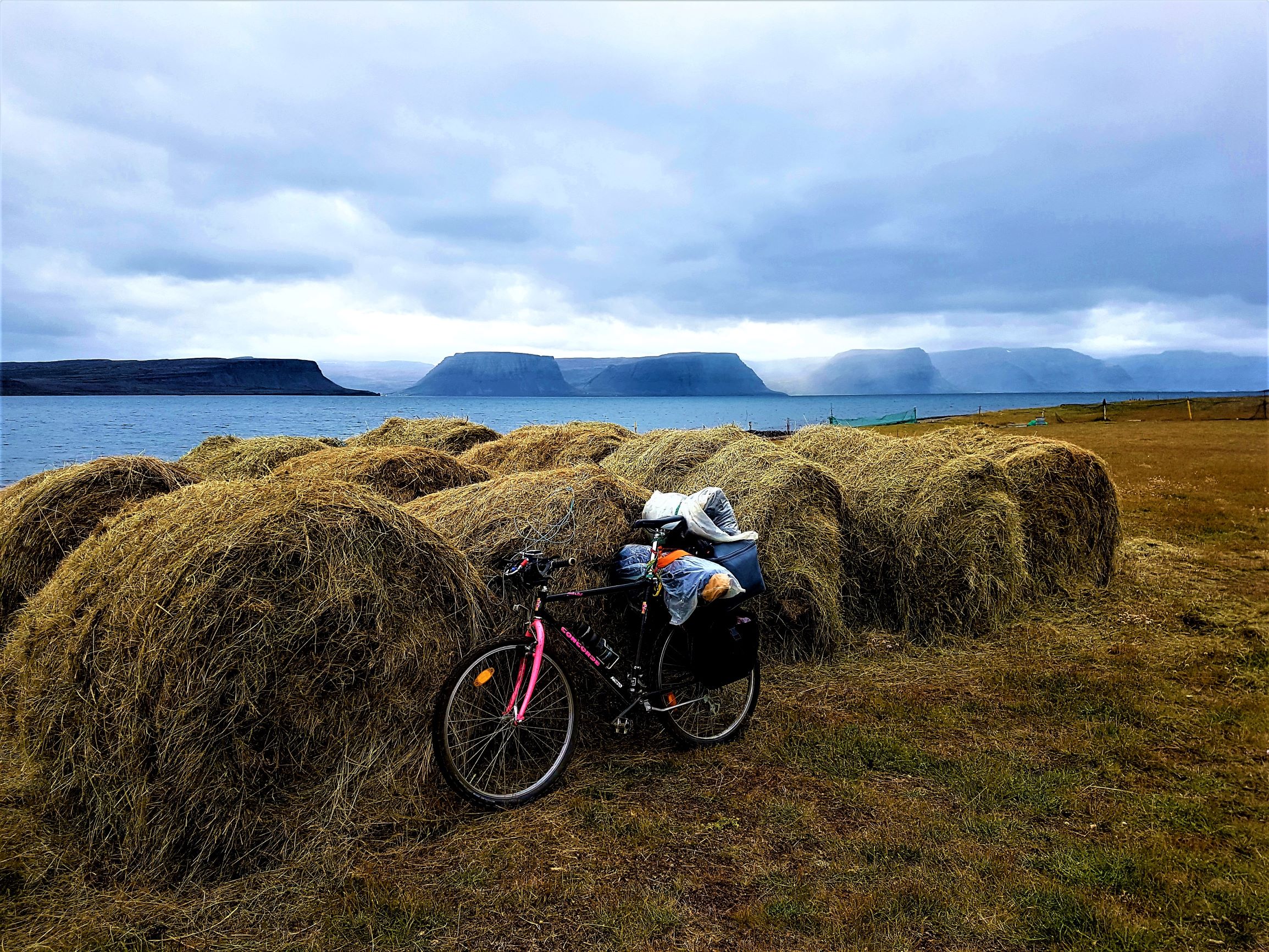 If you'd like to bring a bike for your own two-wheel adventures in Iceland, read more on our Baggage page.